ABC classifications for inventory can be very useful when evaluating inventory levels, warehouse processes, etc., when you have a lot of SKUs. For those of you lucky enough to only carry a handful of SKUs, you really don’t need to categorize 20 items. ABC Is more useful when you have thousands or tens of thousands of SKUs.

ABC is based on the Pareto Principle, which is based on the observation that a small number of causes result in a great number of consequences. In the case of inventory, it translates to a small number of items resulting in a significant amount of sales dollars, warehouse transactions, etc. It’s often referred to as the 80/20 rule, which attempts to quantify this principle. 80/20 would imply that 80% of your sales result from 20% of your items. In my experience, Pareto applies to many things, and sometimes 80/20 applies, but don’t take 80/20 too literally. Things are often in that ballpark, but don’t expect exactly 80% and 20%.

You can also view Pareto and 80/20 inversely. In that case, the bottom 80% of your items (slow movers) would account for only 20% of sales. That’s important because I spend a lot of time as a consultant dealing with slow movers.

So getting back to ABC. In inventory management, you can base ABC on a variety of factors. Here are some examples.

I’m sure there are other things you can base ABC on. Some companies will track ABC separately on several factors. This can be useful, but boy, does it get confusing because each person tends to state ABC based on their own personal preference. If someone says this is an A item, you need to know what they are talking about. ABC is one example of classifying inventory; you will still likely classify your inventory in other ways for reporting purposes. For example, if you want to look at how much space in the warehouse inventory is taking up, you may make groupings of Cube and report on that. You may also just add cube usage to a summary report by ABC (report is broken down by ABC, but shows how much cube A items consume, etc.)

As an operations consultant, I tend to focus on ABC by Times Sold. This is the most useful when evaluating order-picking processes, slotting, etc. But is also useful for evaluating inventory management based on the impact on customers.

So let’s look at calculating ABC by times sold.

You need to start with detailed sales data for all items. You generally need a year’s sales data to accurately calculate the slow movers.

Run a query that counts all sales transactions and groups them by item.

Then sort this by the number of sales transactions in descending order. This will result in your fastest mover at the top of the list, and the next fastest mover would be 2nd, etc.

Create another column that calculates a cumulative total of times sold for each item and all the items above it on the list.

Create another column that uses this cumulative total to calculate a cumulative percentage of the total by dividing it into the total times sold for all items.

Now you need to create your break points for ABC. I’ll start by mentioning I never do just A, B, and C. When you start looking at the details, you’ll likely find you want more categories because there will be such a wide range of times sold within each grouping. For example, you want a grouping for the fastest of the fast movers. And at the other end, there is a difference between a slow mover and an item that has no sales transactions. I will at least go to D, but typically go to E or F.
Next is the decision of exactly where to set the breaks. I like to look at the data to see if there are some obvious break points (natural grouping of items). I’ll also look to create the breaks where they can be easily explained and understood by others. For example, “ A items sell on average at least once per day”, “B items sell once per week”, ”F items had no sales last year,” etc. Also, remember that 80/20 thing; you may want to see what you can do with that. I typically won’t get A items to represent 80% of sales transactions, but the combination of A and B items might. Anything you can do to add some context to your ABC stratification will greatly help others to understand it.

Below is an example I used in my book Inventory Management Explained. This example shows only 35 SKUs, which is not realistic when calculating ABC, but I needed something to fit on a page.
The “Annual Times Sold” column shows that the fastest moving item sold 537 times during the year this is based. 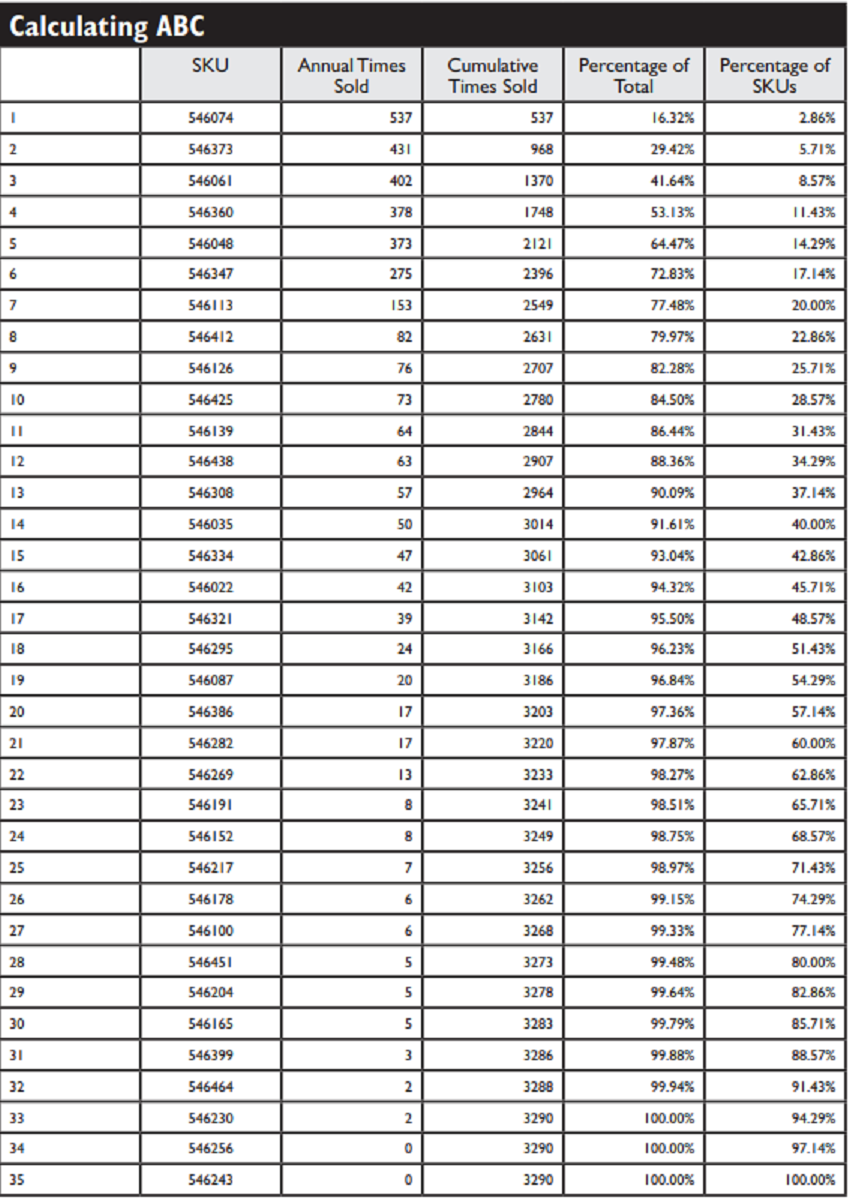 The “Cumulative Times Sold” is the sum of the time sold for all items up to this point in the list. So you can see that the top 10 items sold a total of 2780 times during the period this is based.

The “Percentage of Total” column is based on the cumulative times sold and shows that the 2780 times sold of the top 10 items represent 84.50% of total sales.

The Percentage of SKUs is also based on all the SKUs up to this point in the list. Therefore, those same top 10 items represent 25.87% of your total SKUs.

If we were applying ABC to this group, it would be reasonable to call those top 8 items that account for roughly 80% of sales “A” items. But that’s just because we only have 35 SKUs. But you can see, even within that small group of A items, there would be a significant range between the fastest mover that sells on average more than once per day, and the slowest A item that sells a little more than once per week. And this is where someone suggests we need an A-Plus category for the fastest-moving A items. That can be made to work, but I think it’s cleaner to just split those into A’s and B’s. So let’s say A items are the top 50%, B items the next 30%, C items the next 15% (that gets you up to 95%), D items the next 4%, and E items the bottom 1%. You’ll notice that the grouping percentage increments get smaller as we progress through ABC, but that will still likely result in a significant amount of items in each group due to Pareto.

Below is an example of a summarized Item Profile ABC table. For more infomation on Item Profiles and Order Profiles click the previous link.  Note: this is not based on the data above.

Dave Piasecki, is owner/operator of Inventory Operations Consulting LLC, a consulting firm providing services related to inventory management, material handling, and warehouse operations. He has over 25 years experience in operations management and can be reached through his website (https://www.inventoryops.com), where he maintains additional relevant information.